A banner with the names of the members of the Board of Directors commemorates the date
Palma, 16/08/2022
150th anniversaryHistory

Today the Port Authority of the Balearic Islands (APB) is celebrating the 150th anniversary of the approval by Royal Order of the creation of the Works Committee of the Port of Palma, its own port management body that gave rise to the current APB after several name changes and ports of competence throughout its history. On 16 August 1872, the Director General of Public Works, acting on behalf of the Minister of Public Works, authorised the creation of "a Committee responsible for everything related to the improvements made in the port of Palma".

This committee was made up of the governor of the province, as president, and representatives of the Provincial Council, Town Council, Trade Section, Board of Agriculture, Industry and Trade, two merchants, two shipowners, two landowners and, lastly, the Navy commander and civil engineer.

To commemorate this date, the APB has commissioned a banner with the names of the current members of its Board of Directors. The illustrator, Flavia Gargiulo, and the calligrapher, Paz Alomar, have been commissioned to immortalise for the entity’s history a list of the highest-ranking officials of the port authority.

The APB thus continues the tradition begun in 1972, when it celebrated the centenary of the creation of the port's managing body, with two banners designed with the names of the members of the Committee of the Port of Palma in 1872 and 1972. B. Moll designed these banners.

Mariano de Quintana is listed as the head of the 1872 Port Committee, while one hundred years later, in 1972, Miguel Nigorra Oliver held the position of president, with Antonio Dicenta de Vera as director and Antonio Cirerol Thomás as secretary.

In 2022, Francesc Antich Oliver is elected president, Jorge Nasarre López director and María Antonia Ginard Moll secretary of the Board of Directors, so far the only woman to hold this position in the history of the institution. Domingo Bonnín Daniel, representing the Consell Insular de Mallorca and the latest addition to the Board of Directors, appears in the 2022 banner.

The Madrid-based illustrator, Flavia Gargiulo, has used flowers and pomegranates to illustrate the banner, with golden details to enhance the 150th anniversary logo created for the occasion, while the calligrapher, Paz Alomar, has opted for Gothic lettering to continue the classic tradition of the APB’s banners. The work is done on natural goatskin parchment. 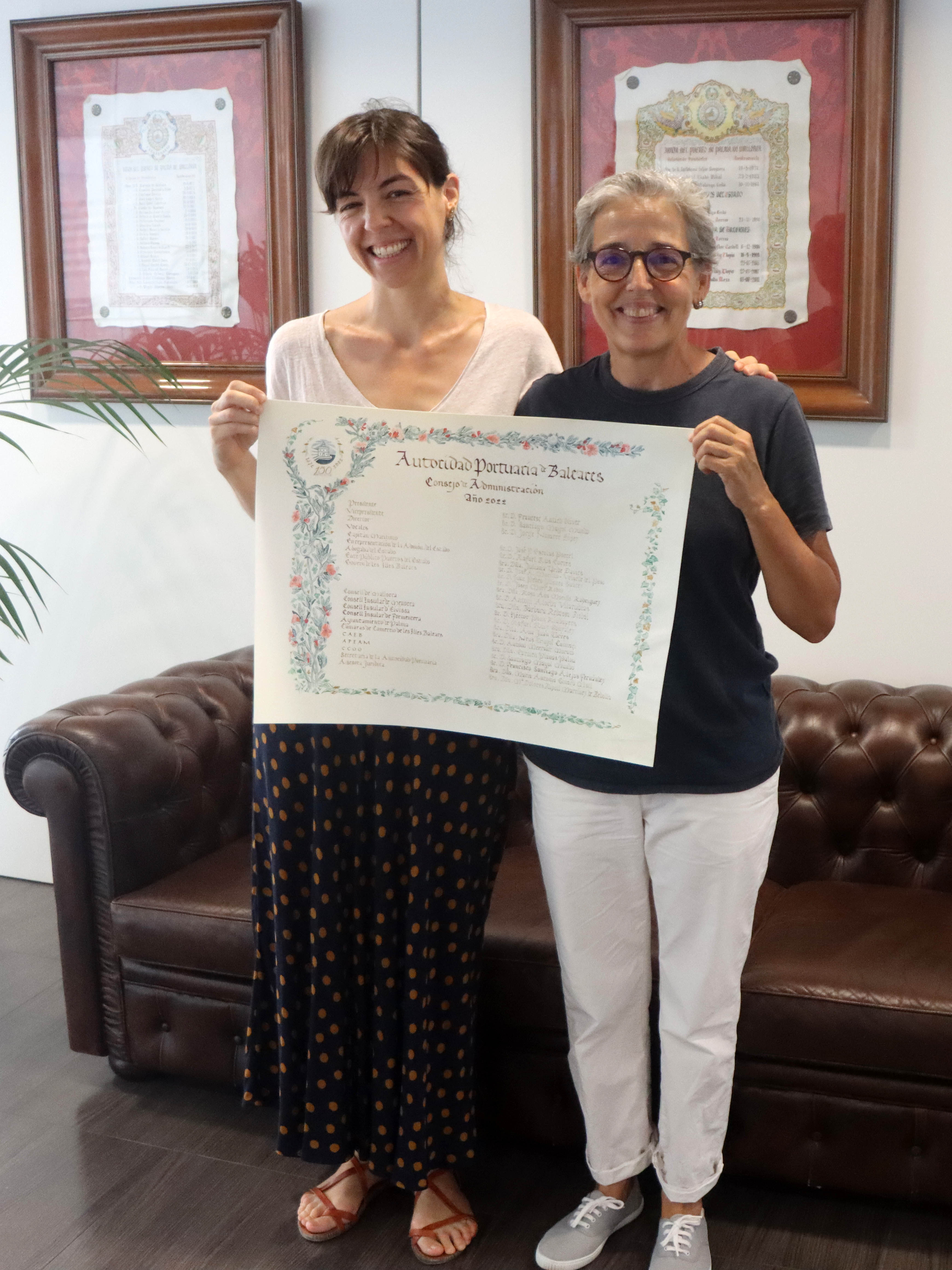 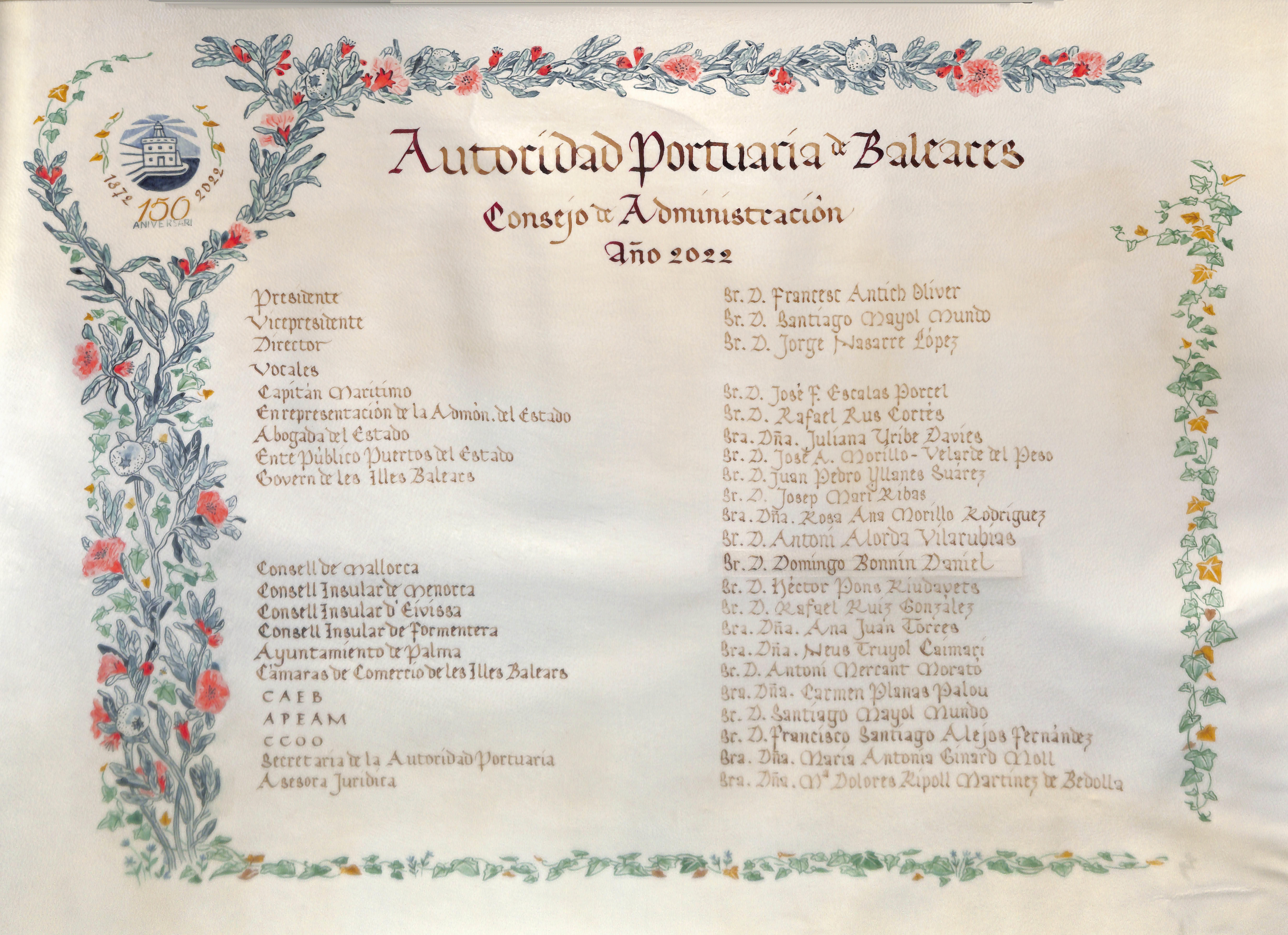 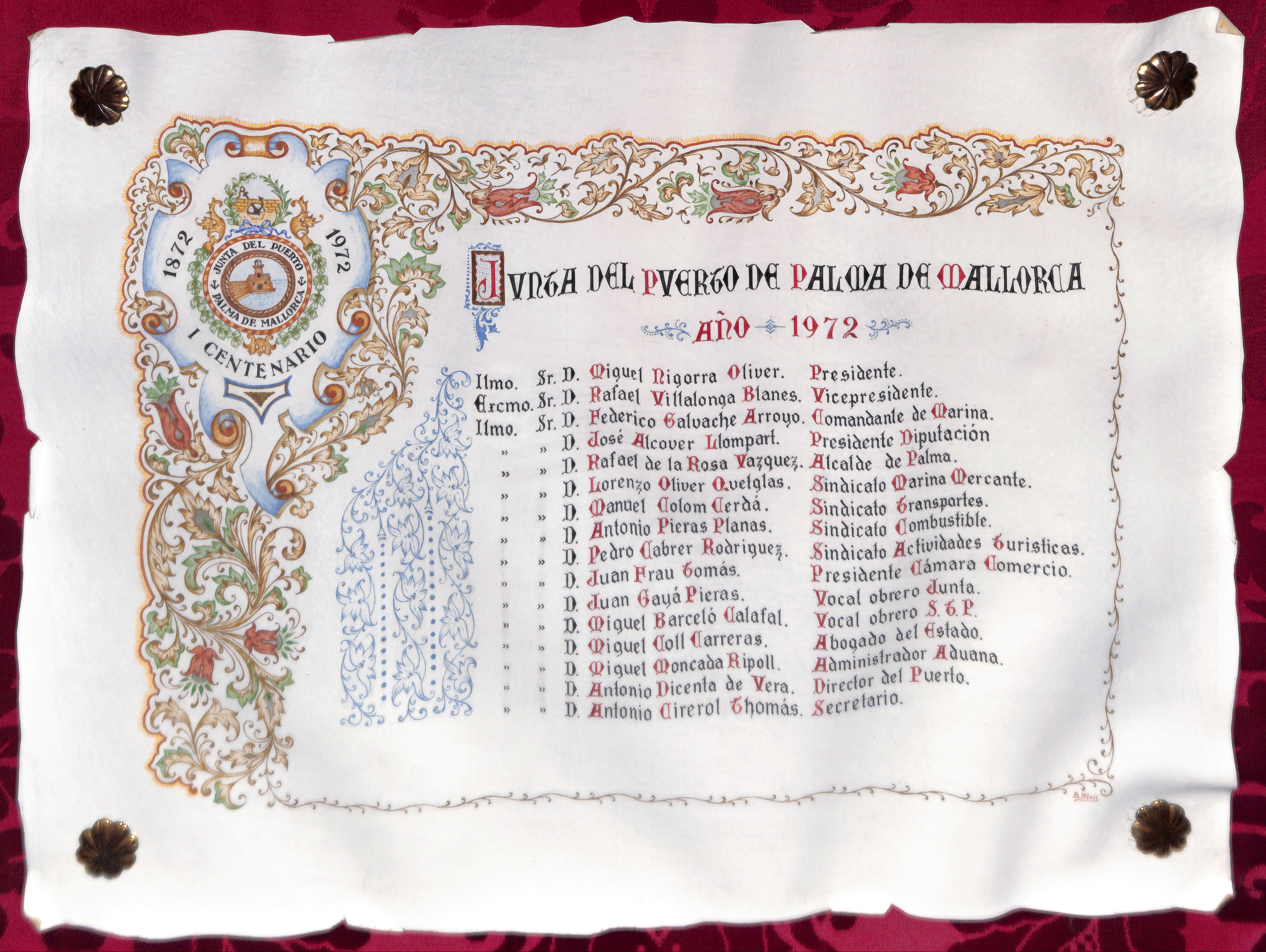 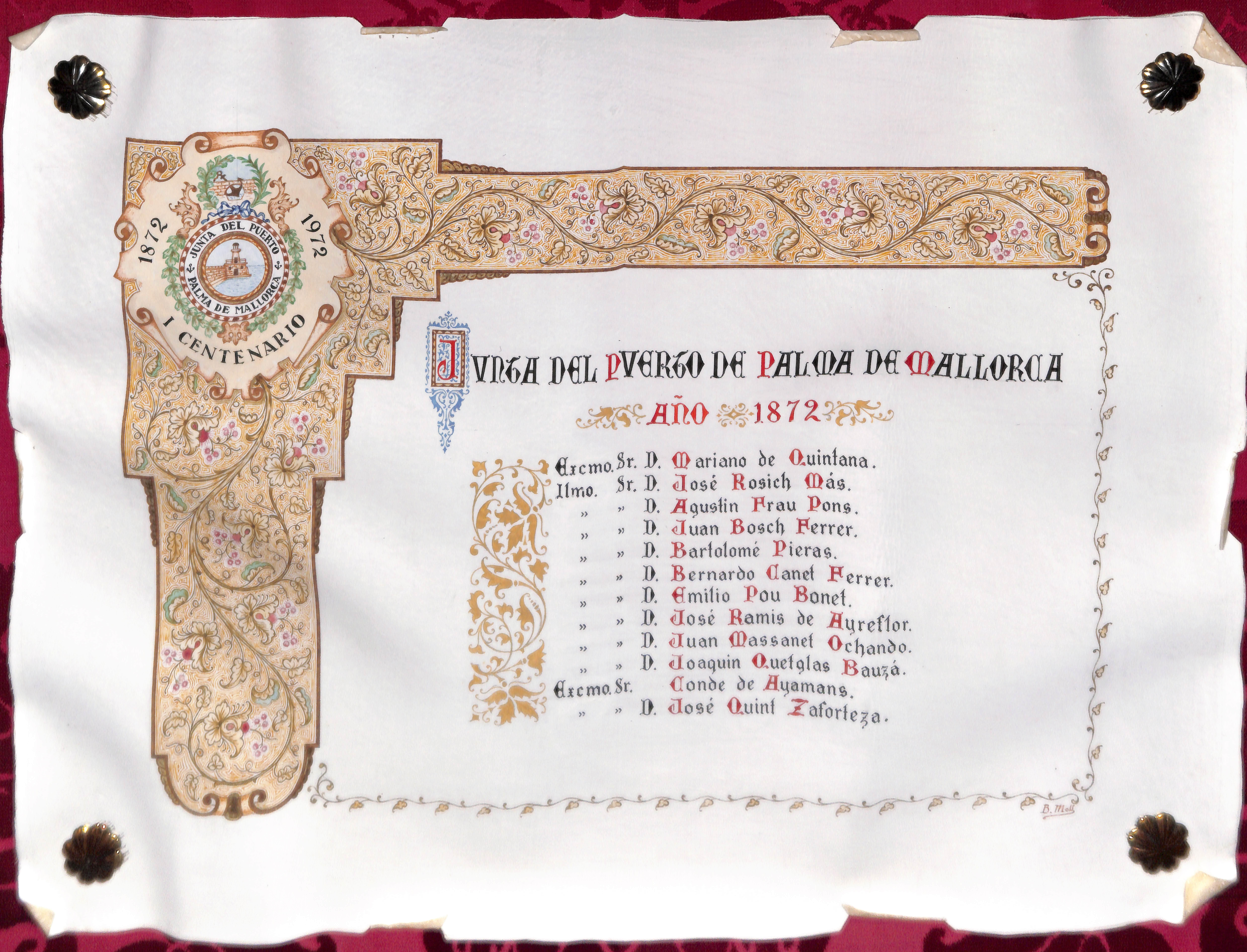 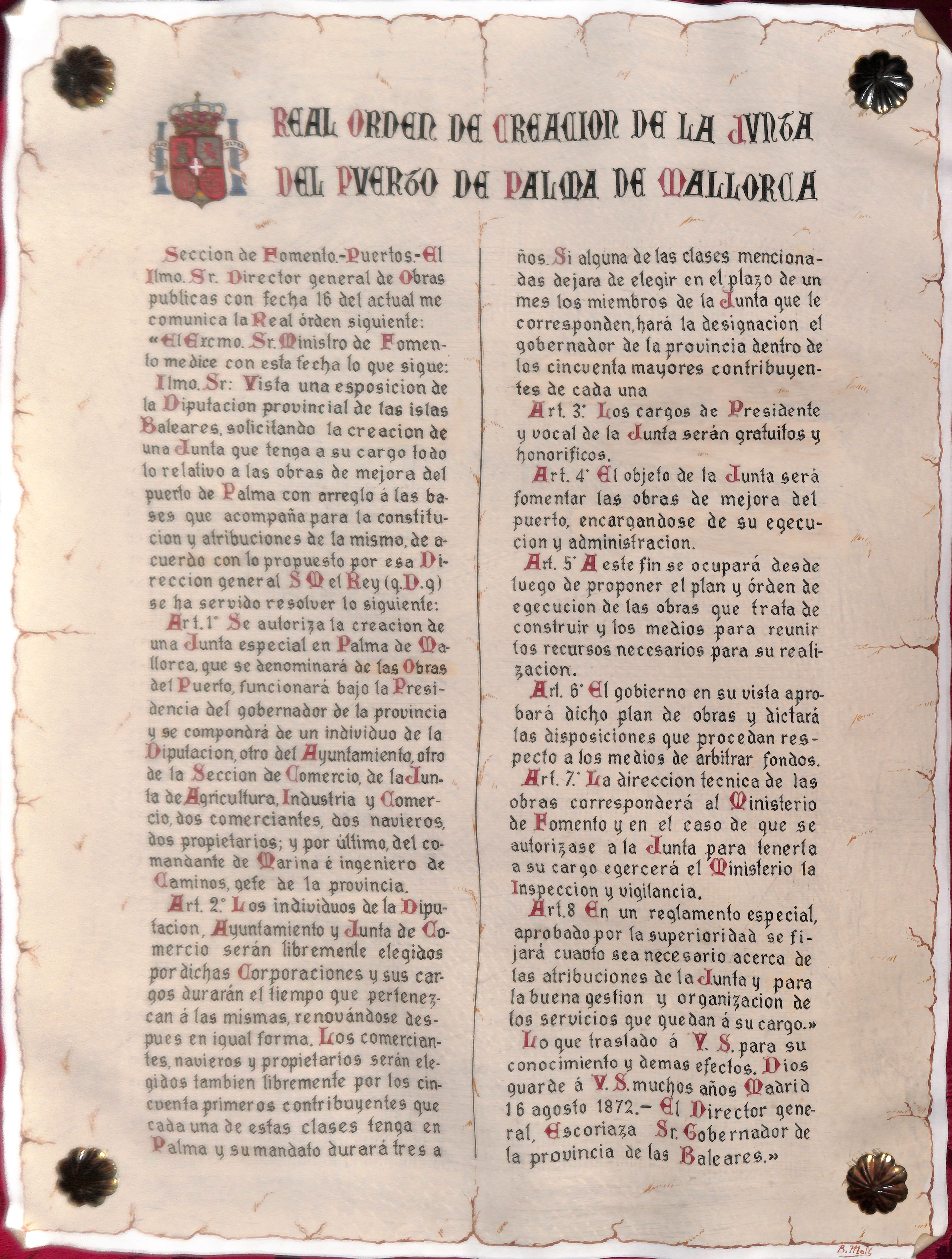